Once you've decided what social media you want, what buttons you want, and how specific you want the style, now you can consider some of the many possible Drupal modules.

Service Links - This module helps you deal with tons of social media services you've never heard of or nobody is using anymore. There are also hosted widgets like AddThis which offer many social media services but they add their own branding. Only helpful if you need a uniform way to enable sharing across a lot of different social networks.

Ridiculously Responsive Social Share Buttons - This isn't just for Drupal. Like Service Links, it also gives you options for multiple social networks (but fewer). The buttons look nice - the buttons use the site colors and then show a small icon and the name of the service, with the name disappearing on smaller screens. The buttons are also responsive. 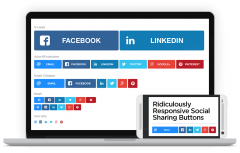 There's a service called AddThis which offers a widget (including a Drupal module to do it for you) and it looks similar to RRSSB. It does other things, and inserts itself into any click, which is why I don't recommend it. AddThis also charges money for paid versions.

The above applies for Drupal 7 only. Drupal 8 just came out so most modules haven't been updated for it, and many won't ever be, including a lot of social media ones. I expect the needs of social media integration will be quite different in another 1-2 years thus this way of adding share widgets could be obsolete.